The gastrointestinal (GI) system is a vast and complex organ system that plays a very important role in basic health and survival.  It is most known for its important role of food digestion and nutrient breakdown.  However, it plays many other important roles in our biological system including immune function, hormonal function, interaction with our autonomic nervous system, maintenance of our GI microbiome, and much more.

Among the major compartments include our oropharyngeal region (mouth and throat), the esophagus and stomach, liver, small intestine, large intestine, pancreas, and rectum.  Each of these compartments are very complex and hence the potential ways in which they can malfunction is also complex.  We will not try to cover every subcategory of GI disease; however, we will highlight certain GI disorders frequently seen in clinical medicine who’s underlying abnormalities are fundamental to chronic illnesses in general.

It is important that provide a brief overview of an evolving field of study regarding the GI microbiome.

The GI microbiome is the collection of microorganisms such as bacteria, viruses, protozoa, and fungi.  It also consists of the collective genetic material from these organisms within the GI tract. The GI microbiome plays an important role in nutrient and mineral absorption, synthesis of enzymes, vitamins and amino acids, and production of short-chain fatty acids (SCFAs).  Other key roles include the production of fermentation products such as acetate, propionate, and butyrate for GI health in general and energy for epithelial cells.  These products also enhance the epithelial (cell lining) barrier of the intestines and help protect against pathogens.

In summary, the GI microbiome is a very important component of GI health in particular and total body health in general.  The GI microbiome organisms greatly outnumber the human body cells with an estimated 3.3 million prokaryotic microbiome genes compared to about 20,000 eukaryotic human cell genes.  The diagram below provides an overview of the different types of microbes that exists in different locations of the GI tract. 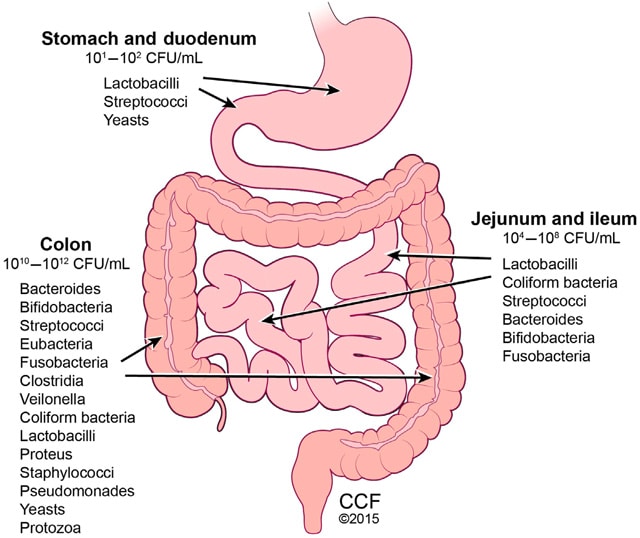 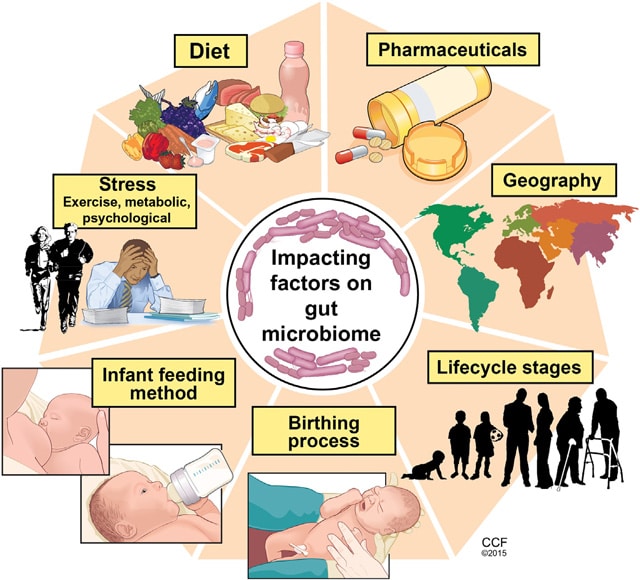 The GI microbiome in particular and the human microbiome in general can be thought of as delicate ecosystems.  These ecosystems, when in balance, allow for optimal biochemical and physiological homeostasis.  They play a foundational role in areas such as immune system function, digestion, autonomic nervous system function, hormonal balance, GI lining integrity, as well as the reduction of inflammation and oxidative stress.

Disruption of the delicate ecosystem of the GI microbiome can adversely affect the GI tract locally and the body systemically.  There are various factors that impact the GI microbiome.  They are outlined in the previous diagram.

Hence the health of the GI microbiome is fundamentally important  for effective GI function and overall health.  The function of the microbiome should be considered as we review the different specific disease states of different parts of the GI tract below.

The most common clinical problems related to esophagus and stomach are generally due to motility problems (reflux) or disruption of the mucosal barriers of these structures (ulcers).  Gastroesophageal reflux disease (GERD) commonly presents as symptoms of partial or full regurgitation of food from the stomach to the throat.  It can be associated with mild aspiration of food in the upper airways resulting in symptoms of cough or wheezing.

Disruption in the mucosal barriers can present as painful ulcers with or without GI bleeding.  Frequently, individuals will present with a mild anemia along with symptoms of black tarry stools.  Abdominal pain is also a common symptom. Viewing of the upper GI area frequently shows evidence of inflammation of the mucosal lining of the esophagus and/or stomach with or without bleeding. 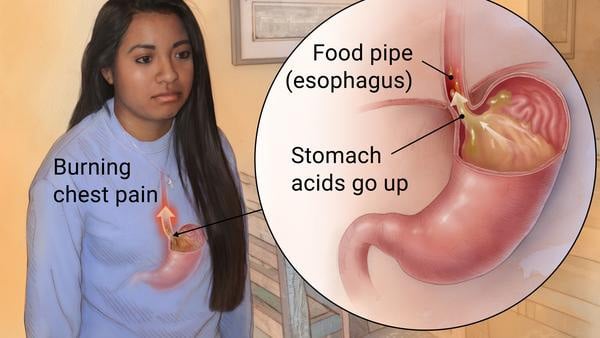 The liver is a very specialized, complex organ.  It plays important roles in immune function, digestion, protein and enzyme production, detoxification of ingested substances (food, medications, other chemicals), and much more.  The vast majority of substances consumed by mouth go through the liver.  Food in particular is initially broken down in the small intestine and transported through capillaries across the intestinal membrane to the liver.  The food is further broken down or in some cases chemically activated (vitamin D).

The byproducts of these foods are then used in the production of substances needed for bodily function.  For example, the protein ingested in the GI tract is initially broken down to its constituent amino acids.  These amino acids are taken up in the liver and utilized for the production of antibodies or enzymes for the clotting system, etc.  Toxic ammonia from animal protein is converted to a nontoxic molecule, urea, within the liver.  Medications as well as other chemical substances are processed in the liver as well.

When the liver is overburdened from excess toxins passing through, it can begin to malfunction such that it doesn’t neutralize toxins effectively or manufacture needed compounds adequately. Other causes of liver dysfunction could be due to local inflammation or increased oxidative stress.  Inflamed liver cells can become disrupted and release enzymes that can be detected in the blood seen as increase blood levels of liver enzymes.  Slow progressive liver cell decline and death can lead to overall impaired function resulting in low protein production (low albumin levels or abnormal bleeding due decreased clotting proteins) or increased ammonia levels in the blood.

Signs of more advanced liver disease consists of abdominal and/or leg swelling.  Changes in the skin such as the formation of a yellow discoloration.  These clinical signs can be associated with other forms of organ failure such as heart, kidney, and intestinal dysfunction.  Individuals with this level of advanced liver dysfunction may also have neurological dysfunction.  Individuals with this level of disease should seek medical attention immediately.

The small and large intestines collectively constitute a very large surface area (about 4 tennis courts) and play a very important role in digestion and metabolism.  The most frequent clinical abnormalities that we see relate to inflammation that results in a spectrum of disease states ranging from irritable bowel syndrome to advanced inflammatory bowel disease (Crohns Disease or Ulcerative Colitis).  Generalized bloating, gas, and constipation are seen in the setting of nonspecific disorders likely related dysbiosis (microbiome imbalance).

These types of disorders can be isolated to the intestines but are frequently associated with systemic illnesses.  Additionally, a history of prior surgery to the GI tract further complicates the process of understanding the underlying mechanisms of these disorders. 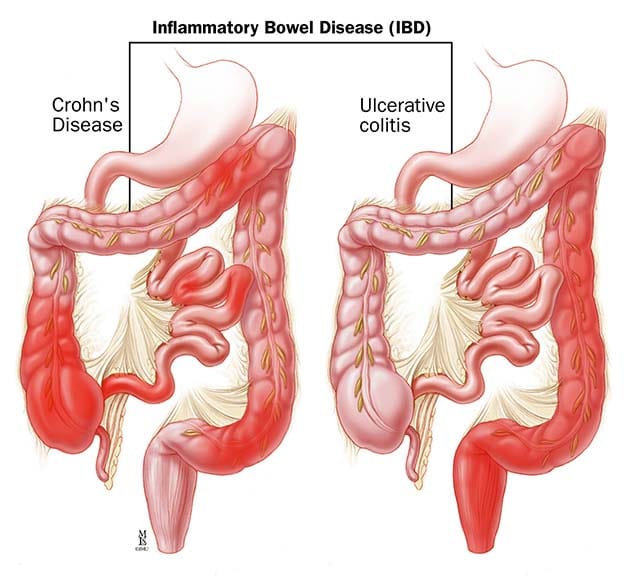